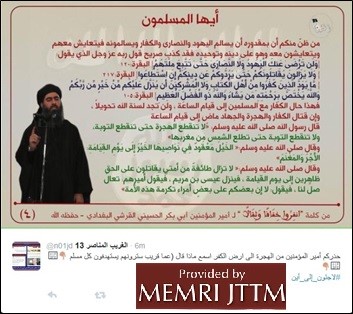 In response to the refugee crisis involving the migration to Europe of hundreds of thousands of people from Syria and other Middle Eastern countries, the Islamic State (ISIS) has launched a large-scale media campaign urging Muslims not to seek refuge in the West but rather to come to the territories under its control. As part of the campaign, ISIS has released 13 videos and has published numerous articles and pamphlets; additionally, its activists have flooded social media with this message, including with a Twitter campaign under the hashtag “Refugees – to where?”