Catherine Shakdam is a political analyst, writer and commentator for the Middle East with a special focus on radical movements and Yemen. Her writings have been published in world-renowned publications such as Foreign Policy Journal, Mintpress News, the Guardian, Your Middle East, Middle East Monitor, Middle East Eye, Open Democracy, Eurasia Review and many more. A regular pundit on RT, she has also contributed her analyses to Etejah TV, IRIB radio, Press TV and NewsMax TV. Director of Programs at the Shafaqna Institute for Middle Eastern Studies and consultant for Anderson Consulting, her research and work on Yemen were used by the UN Security Council in relation to Yemen looted funds in 2015.

Islamic State (IS, formerly ISIS) has built an empire, functioning as both a company and a state: selling oil and trafficking precious art while building a formidable army. But how did it become the world’s wealthiest terrorist group?

The fight of a generation, terror has undoubtedly come to define how nations, people and of course religious communities relate to one another. The evil of our modern days, terror has been pinned on Islam; the devolution we were told of an ideology whose creed originates in the deserts of Arabia, as violent and as unforgiving as the history of its people.

From the moment the World Trade Center tumbled to the ground, media, politicians and officials have drummed out their pre-packaged reality, playing on fear, hatred and revenge to fuel the war narrative, pointing angry fingers at Muslims the world over so that “free folks” remain oblivious to the shackles their states slowly weaved around their neck and feet – one civil liberty at a time, one executive order at a time.

For well over a decade Western nations have followed their leaders in wars and in fear, in anger and in disillusion, forever blaming “those Muslim radicals” for seeking to destroy their freedom and democracy. However, as wars followed one another, as fronts opened up in Afghanistan, Iraq, Libya, Syria, Yemen, Pakistan, terror still advanced, radicalism still claimed more men and more territories to its name.

In perfect synchronicity with terror’s progress, Washington and its allies have raised the bar, forever inflating their defense budget, ceaselessly commandeering more resources and more solutions in view of cracking this terror algorithm. And yet, the superpowers have proven seemingly powerless in the face of this scourge.

A decade into this war and terror has not receded; instead it has carved itself an empire at the heart of the Greater Levant, merging territories and communities under its banner. For all its technological prowess and its economic might, the West has failed to curb Islamic State. Instead, it watches from afar as terror militants organize themselves into a state, building an economy and military power to match their hegemonic ambitions.

However, are we really to believe that Western powers, those powers which proved so confident in their own strength that they could challenge Russia and threaten Iran with war over allegations that both stood a distant threat to Western order, now stand clueless before IS? And if Western powers are not looking to decimate the militants in their tracks (as Washington’s neocons warned they would do to Iran should it so much as blink the wrong way), how can we not assume that this terror was indeed engineered to serve a covert agenda?

Conspiracy theory? Well not really … US officials have already owned up to creating and funding Al-Qaeda, so admitting to Islamic State is not that big of a stretch. In 2012, then-Secretary of State Hillary Clinton very publicly admitted to the engineering and funding of Al-Qaeda as a tactical weapon of war in Afghanistan.

Bearing in mind that Al-Qaeda came into being in the late 1980s to rebuke Moscow’s ambitions in Eurasia and keep the old geopolitical ley lines in check, some 25 years of expertise on playing war with radicals would likely look like IS does right now – lean, mean, well-trained, well-equipped and well-strategized. If Afghanistan was the training ground, we can safely assume Syria and Iraq are the end product. 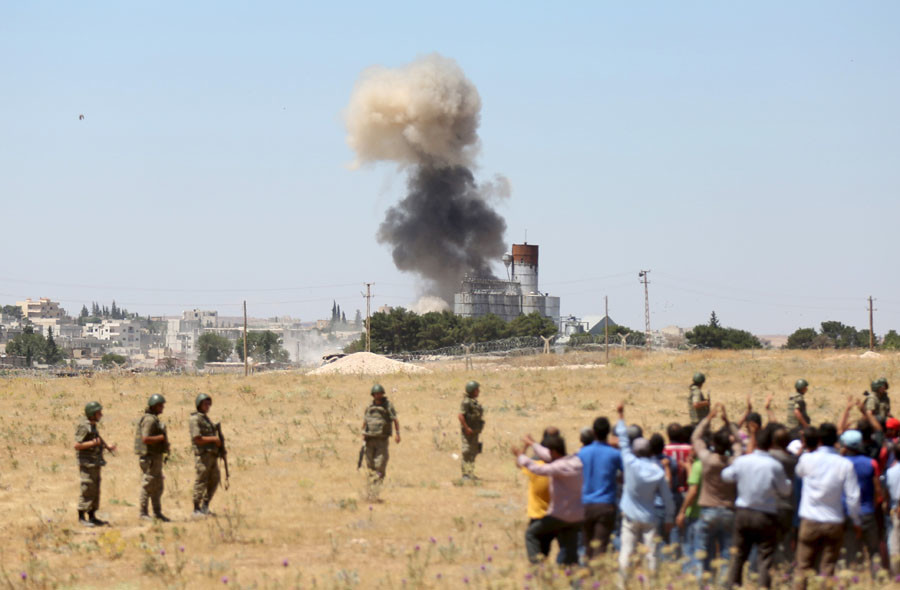 In a report for Mintpress this February, Sean Nevins wrote, “The Islamic State of Iraq and Syria [ISIS] has created an empire that stretches hundreds of miles through the countries of its namesake. It has accumulated riches that enable it to fund a war, govern a population of around 8 million people, and operate massive amounts of infrastructure in the areas it has conquered.”

How does one go about creating an empire if not with allies, and if not that, at least patrons?

Armies and resources to fund expansionist wars do not simply manifest themselves out of thin air, nor can advances be consolidated without strong logistical and political support.

As of 2014, Iraqi officials estimated that Islamic State had as much as £2 billion in its coffers. A year of looting, ransacking precious artifacts and siphoning natural resources most likely raised the financial bar even higher – no such thing as recession in the land of the black flag!

Interestingly, while the US and its allies were willing to rewrite international law to freeze Iran out of the economic and financial loop by way of sanctions and draconian oversight on its foreign trade, IS has been allowed to trade oil through Turkey and Jordan without so much as an eyebrow being raised.

Luay Al Khatteeb, the director of the Iraq Energy Institute explained in an interview with CNN in 2014 how IS “crude is transported by tankers to Jordan via Anbar province, to Iran via Kurdistan, to Turkey via Mosul, to Syria’s local market and to the Kurdistan region of Iraq, where most of it gets refined locally.” To believe that state officials are not complicit in this “trade” flies in the face of logic.

Whether such complicity stems from a desire to profit from a lucrative trade or from a darker agenda, makes very little difference – when it comes to terror, even plausible deniability makes you guilty by association. But then again that would be to assume that states’ officials are oblivious to the plague they are propping up. I’m not sure we have this luxury anymore!

Facts increasingly point to a grand terror machination. From arming to training IS militants, all boxes have been checked. It is now just a case of unleashing the jihadist horde on the world and watching it spread.

When not even the New York Times is attempting to deny that weapons are flowing to radicals in Syria under the pretext of democracy building, then you know something has gone awry.

In April 2013, the United States confirmed it had set up a $70-million program in Jordan “that is training the kingdom’s special forces to identify and secure chemical-weapons sites across Syria should the regime fall and the wrong rebels look like getting their hands on them,” as was reported in the Economist. That same month, the Obama administration also promised to double non-lethal aid to the Syrian opposition, bringing the total to $250 million.

In September 2014, US President Obama pledged an additional half a billion dollars to the war on terror in Syria. The problem is, those so-called “moderate” officials never tire talking about aren’t exactly choir boys – they are in fact Islamic State affiliates. Again, this is not a conspiracy; those are the facts, and such facts have been documented at length.

“Details leaking out suggest that ISIS and the major military ‘surge’ in Iraq – and less so in neighboring Syria – is being shaped and controlled out of Langley, Virginia, and other CIA and Pentagon outposts as the next stage in spreading chaos in the world’s second-largest oil state, Iraq, as well as weakening the recent Syrian stabilization efforts,” William Engdhal, a prominent analyst wrote in an op-ed for RT.

Islamic State was not accident; it was engineered, assisted, trained and deployed under the authority of the United States to invade, occupy and exploit the Middle East, while claiming liberation and democracy-building.